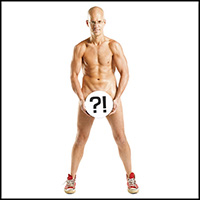 A musical journey of self doubt, naked ambition, personal revelation, and the challenge of living up to a philosophy. …plus a song about squirrels First off: INTERROBANG has over 60 minutes of music, comes in an incredible custom case, AND includes a 16 page, full-color booklet with photos, lyrics and a detailed essay on the Theory of Relativity. Really! (News flash: in March 2006, Interrobang was awarded a design competition “Best of Show” at the ADDY® Awards in Pennsylvania. In April 2006, Interrobang went on to win a Gold ADDY at Regionals and is now a Nationals ADDY finalist.) Second off: What’s an INTERROBANG?! Question mark, exclamation point. Hi, Geo here, and I started writing the songs for Interrobang during the winter of 2005. I saw a documentary on the band They Might Be Giants and was inspired by their endless drive and creativity. I wasn’t really familiar with their work, and often found their vocals to be nasally annoying. Something came across in this film however that demonstrated their earnestness and drive. It really inspired me. (I’ve subsequently become a big TMBG fan. Better late, eh?…) Right after viewing the documentary I wrote down: “I hate my hair, I hate my voice.” This was the first line written for the record, and in deep, deep, DEEP (we’re tawkin’ deep) haiku like fashion revealed to me the direction the album would take. It would be a much more personal record; this time turning my observational vitriol inward at myself, instead of outward at late night purveyors of god, false panaceas and Spaneck Vertical Roasters. I would also consciously try to write when the muse punched me in the face, and not save up notebooks full of ideas and sketches, waiting until “composing time” to distill and formulate the snippets into songs. The tunes were often written in single stretches, with minimal editing and rewriting, all in faux western “suiboku-ga” style. From disappointment and resignation, to observation and elation, I think the songs on Interrobang are some of my most earnest. I see the first 30 minutes of the record as a Geology suite (with one brief detour) that reflects on the both doubtful and assured nature of my psyche. If you’re kind enough to purchase this disc, keep in mind the idea of question and resounding answer. Now I know that this self-revelatory thread doesn’t carry through every single tune (hey, I gotta have at least ONE song about interesting fauna) but I think overall it’s about as confessional and personal as I get. This record rocks out more than my previous CD, Coelacanth, not that that’s better, or worse- just something different. I wanted the guitars to drive this record, and I think that they do just that. Dig it!