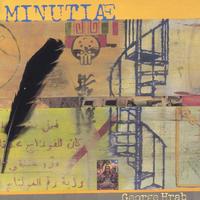 This album sounds completely different from what I intended. Well, not completely different, but a lot different. The original concept that I thought up – while trying to sublimate my pain one day while jogging – was to do an all-improvisational album. I had liked the title track from my last album [sic], which had been recorded almost as an afterthought. I decided to go in and quickly record some pure improvisations. This idea didn’t really have a chance of lasting long, for a number of reasons. Primarily, one is NOT in the studio a hell of a lot more often than one IS in the studio, so it’s best to use funds and time wisely and non-frivolously. Secondly, during the late spring/early summer of ’98, I set up a little pseudo permanent 8-track studio in my apartment, and just began experimenting. (Up to that point, I had never used my Tascam 488 recorder regularly, because I never had the patience to set it up each time I wanted to use it.) What followed was such an explosion of songwriting that I had to rethink what I wanted to do with my studio time. I decided then, that together with just a number of improv pieces, I would also throw in as many new tunes as possible (plus one old one, but I’ll get to that). So in early July I went up to Queens and came out with … Minutiae.